Peter Jones, Duncan Bannatyne, Theo Paphitis and Deborah Meaden are all successful UK entrepreneurs whose names your average Brit would know. However, one name which has flown somewhat under the radar but deserves similar recognition is Sir Martin Sorrell. Whilst Sorrell didn’t have one of the BBC’s most successful series to promote his name, his net worth exceeds half of the investors on Dragons’ Den.

Sorrell is best known for founding WPP Plc – the world’s largest advertising and PR group in terms of revenue and workforce. When Sorrel exited the company in April 2018, he became the longest-serving chief executive of any FTSE 100 company – a position he held since 1985.

The 75-year-old has since moved on to form S4 Capital Group, which describes itself as a “new age/new era digital advertising and marketing services company.” In its most recent quarter, the company posted a 53% gain in total revenue, proving that digital marketing is not only immensely lucrative but is recession proof in times such as a pandemic.

To form a more thorough understanding of Sorrell’s key to success, we must first take a look at WPP. Just as Berkshire Hathaway started its life as a textiles company, WPP began its journey as a wire manufacturer in 1971. In fact, WPP stands for Wire and Plastic Products.

In 1985, Sorrell was looking for a listed company he could use as a marketing company and to embark on his expedition of serial acquisitions. He consequently acquired a 30% controlling stake in the business.

Within its first year, WPP made 11 acquisitions under Sorrell. In 1987, the company bought J Walter Thompson group for $566 million and Ogilvy for $864 million in the following year. Kicking off the 90s, WPP acquired healthcare advertising firm Thomas G Ferguson Associates. Towards the end of the decade, WPP bought a stake in Peapod, Syzygy and HyperParallel in 1997 and Lambie-Nairn and Prism Group in 1999.

At the start of the millennium, WPP heightened their ambitions and acquired Young & Rubicam as well as 35 other acquisitions. 2001 saw a further 26 acquisitions including Tempus Group PLC.

In 2008 WPP acquired Taylor Nelson Sofres and in 2010 WPP began embracing digital companies by acquiring Digitaria Interactive as well as I-Behavior Inc. Communications firm The Glover Park Group was bought by WPP in 2011, and one of the world’s best-known digital shops AKQA sold a majority stake if its business to WPP in 2012.

Spanning three decades under Sorrell, WPP had completed over 250 acquisitions. Such a business model has paid off for the company, with its IPO share price opening at 104p in 1995 and peaking at 1900p in 2017.

In today’s modern framework, lessons learnt from WPP’s acquisitions largely come from those completed post 2010 as the company’s focus shifted more towards digital advertising. “Advertising is not an art anymore, it is a science,” Sorrell said in 2013. “And it’s much more than just advertising.”

Indeed, as technology has advanced, so too has advertising. Big data has allowed firms to cultivate, analyse and ultimately utilise consumer patterns in order to laser target their adverts. Embracing this concept enabled Sorrell to capitalise on not only using modern technology to advertise but to acquire companies that specialised in doing so.

“The only place in our industry where there are scale benefits are in media buying… and it’s mainly in legacy,” he said in 2013. “There are not scale benefits in the area of creative.”

Grey Group, Ogilvy, VMLY&R, and AKQA are all advertising and digital agencies that WPP acquired under Sorrell. AKQA alone has 6000 employees in over 50 countries.

Perhaps what’s most striking about Sorrell’s strategy is that whilst he recognised the importance of digital marketing in the modern age, he also realised that acquiring advertising companies to do the leg work is more lucrative than building upon one’s own marketing arm.

Likewise, clients also understand the over-competitive nature of the advertising field and thus enlist marketing duties to third parties such as those acquired by WPP. Commercial giants such as Nike, Coca-Cola and even Amazon Prime Video are all clients of AKQA.

Moving on to S4 Capital, Sorrell continues his prowess as a serial acquirer, further demonstrating that digital media acquisitions serve as avenues for increasing growth and revenue.

“We estimate that in 2018 digital accounted for approximately 45% or $225 billions of total global advertising spend of $500 billion, and project that by 2022 this share will grow to approximately 55%,” S4 states on their website.

S4 Capital’s most significant acquisition to date was their purchase of MediaMonks for $350 billion in 2018, issuing shares to raise capital for the acquisition. The Dutch digital production company was S4 Capital’s first acquisition and is described by Sorrell as being a “new era, new age” business that is “totally different to anything that we saw at WPP.”

MediaMonks specialises in 360 video, VR and AR – providing clients with the opportunity to create immersive content for their consumers. Working with Audi, MediaMonks created a VR experience that allowed customers to virtually drive their new Q5 SUV around a racetrack.

Victor Knaap, CEO of MediaMonks, called the acquisition a “merger for the Instagram era”, highlighting how “the Instagram generation posts something for 42 seconds, if it doesn’t hit enough likes or shares in the first 42 seconds, they take it offline, re-edit and post.” Knaap compared this to traditional media which takes 3 weeks to provide results, stating that neither way is necessarily the right way to advertise but MediaMonks tries to find the middle ground.

MediaMonks’ expertise in media enhancements, technology development and their understanding of social media trends is of paramount importance to Sorrell. Their ability to create immersive content and to deliver it efficiently and effectively outclasses an internally built media arm. By adding MediaMonks as a vertical, S4 Capital reaps the benefits of their unparalleled skillset without building from the ground up.

Learning from their recent owners, MediaMonks too has formed their own mergers. Last year, the company merged with BizTech, providing expansion into Australia and Canada. “We will be effectively marrying engineering, design, and content for a new era of creativity. But we’re not just broadening our client offer, we’re growing our network that will span from Mexico to Melbourne and welcome a brand-new super crew of Adobe experts,” Knaap said of the move.

Of course, the merger in turn meant that S4 Capital would also benefit. Sorrell said he was “delighted with the deal” and also expressed excitement about the company’s “Adobe expertise”.

MediaMonks also merged with influencer agency IMA in 2019 with Sorrell stating, “this merger is yet another example of our focus on top-line growth. Influencer marketing is an important sub-set of the digital content marketing industry and is predicted to double in size over the next three years.”

Most recently, Paris-based digital creative agency Dare.Win merged with MediaMonks in late 2020, in an effort for S4 Capital to expand into the French market.

MightyHive, which joined forces with S4 Capital in 2018, merged with Ocra Pacific in July 2020. The Seattle firm is a market leading full-service Amazon agency and boutique consultancy. S4 Capital aims to capitalise on branding through Amazon – again focusing solely on digital.

From S4 Capital’s perspective, these acquisition mergers build upon their verticals-framework, compounding the effects of extending their internal network.

By looking at Sorrell’s history with WPP and continued work with S4 Capital, it is clear that the British entrepreneur’s appetite for M&As has not diminished. For Sorrell, it’s a tried and true strategy of not just business growth but revenue growth too.

Of course, Sorrell’s ability to splash out on M&As comes from his already-accumulated wealth. To date, Sorrell has invested £60m of his own money into S4 Capital – a sum which most start-ups and even mid-sized businesses would deem unrelatable. However, whilst his capital may be unattainable by your average business (for now), his strategy is not necessarily out of reach.

Growth businesses rely heavily on reaching larger audiences and thereby would consider sizeable investments into their media/advertising arm. Instead of ploughing gargantuan sums into building a media arm from scratch, firms should consider merging with or even acquiring other established companies that specialise in the sector.

Furthermore, Sorrell has demonstrated that expanding vertically as well as horizontally is financially lucrative for the core business. Revenue earned from acquired or merged companies can theoretically serve as passive income and a wealth multiplier.

Whilst Sorrell’s success comes from being more of a serial acquirer, businesses looking to expand needn’t jump to the extreme of striving for hundreds of deals. Instead, businesses should focus on finding other key businesses that provide missing components.

Additionally, mergers such as BizTech and Dare.Win demonstrate how M&As are efficient in expanding across international borders. Instead of building from the ground-up abroad, why not join forces with an established foreign company who already understands the intricacies of their local market?

Digital media is irrevocably the future of advertising and firms of any size need to jump aboard quickly. The fastest, most efficient (and possibly the cheapest in the long run) method of engaging in the field is through M&As. 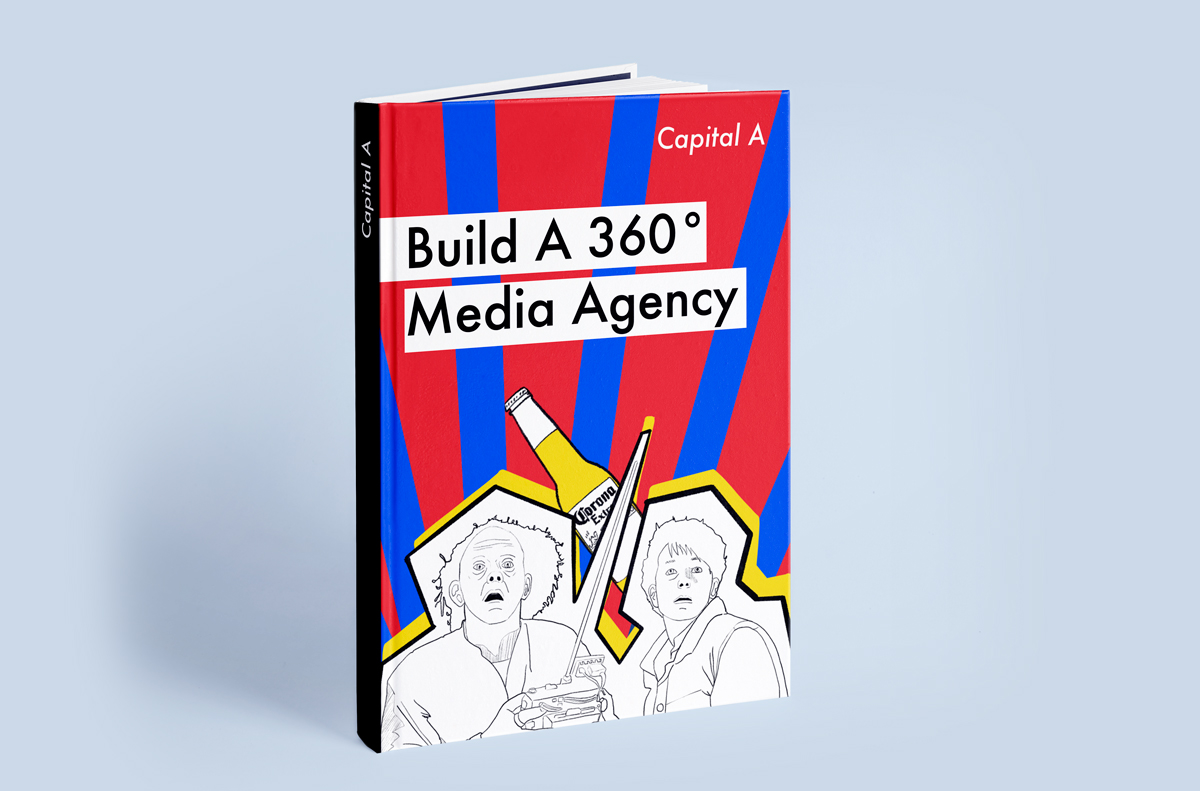